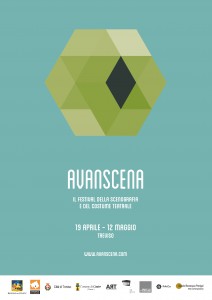 Avanscena is a Theatre Set and Costume Designing Festival set to cast light on the complexity and the charm of the theatre backstage work : many skilled labourers who create the magic of staging, through several techniques and procedures, however between tradition and innovation.

Many professionals are being involved in the Theatre universe: from set and costume making, to jeweller’s craft, props making, to light designing. All those works demand huge abilities. The artists, technicians, craftsmen are extremely experienced and qualified, all of them carrying the highest standard of professional skills. Avanscena offers a space for reflection, discussions and sharing between Theatre professionals, in the mean time it is also an opportunity for the public to approach theatre and experience the backstage art. However, the Festival purpose is to spread and set off the knowledge of stage professions.

A great event in the city

The Festival will take place in Treviso, from 16th May 30th  May 2013. It will involve many locations and local realities in a multi-colored and widespread event. Avanscena will range over days of workshops and debates, exhibitions, performances and live shows, including also a video art contest and a photography contest. Treviso is historical venue for many scenic workshops and artists. It will become the centre of a great events dedicated to the stage world, not only to professionals, but to anyone interested in facing this charming universe. Eventually, Avanscena will be open to students who wish to go into Theatre arts thoroughly.

Avanscena will involve several speakers, a selection of professionals and lecturers, coming from important Universities and Academies: directors, set designers, costume designers, light designers, who in the last decades imposed themselves in the Italian theatre survey. Most of them are linked by a close bond of cooperation with Venetian territory – Venice Academy of Fine Arts and Theatre la Fenice. Moreover, Naples Academy of Fine Arts and Tartu Theatre (Estonia) will take part to the event as well. Avanscena viewpoint: creating a networking between stage artists and professionals for a chance of future cooperations.

Avanscena will be organized into several sections – Set Design, Costume Design, Criticism and “Scene Makers” Workshops. Many exponents of traditional and independent theatres, as well as non-professional  (local and international) ones, will bring in their experience. A rich and complex schedule includes meetings, workshops and exhibitions, all of them set up to satisfy anyone’s hunger for arts and stage.