Avanscena is the First International Festival of Costume and Set design in Italy, and this year is at its 4 th edition.

Avanscena is the festival of the representation of man through stagecraft and performing arts.

Avanscena is a free and open event.

From 7 to 11 November 2016.  However, the festival will officially end in the spring of 2017 at P.Ar.Co – Pavillion of Contemporary Art in Treviso / Padiglione di Arte Contemporanea.

Between Venice, Turin and Treviso, with a fascinating media flow.

AIM OF THE EVENT

At the beginning, the main purpose of the festival was to promote the productive and cultural centres of excellence scattered in the Venetian mainland, a hotbed of highly qualified professionals and artisans who have been serving Venetian and worldwide stages for centuries.

Today the aim remains the same: research and enhance skills and traditions that can guarantee the survival of stagecraft, both nationally and internationally. 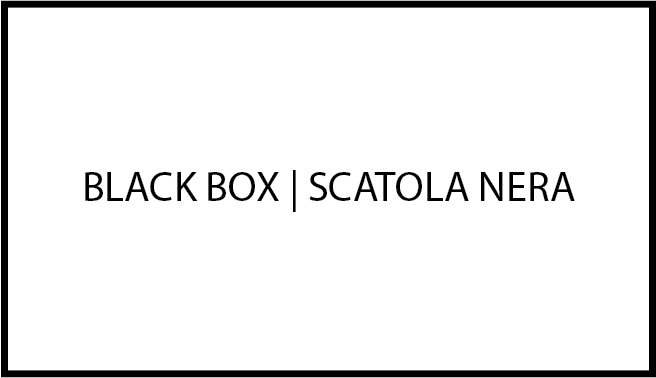 Black Box is one of many terms used to define the stage in contemporary theatre, where the actors and the scene – after the curtain has been raised – are frequently framed by a black wing.

The black box, however, is also a device that records the “memory” of cars and airplanes and that occasionally becomes an instrument to reconstruct the past.

The 4 th edition of Avanscena will offer the chance to discover languages and instruments used in contemporary theatre. The festival will revolve around one question: What are the prime foundations on which performing and theatrical arts can be built and defined?

BLACK BOX | Scatola Nera represents the limits, the emotions, the history, the knowledge, the culture, the economy, the political and poetic boundaries in which the artistic and theatrical production operates today.

Avanscena will focus on the methods artists, scholars, technicians, mechanics, tailors and intellectuals employ to face the problem of identity and of defining their own subjectivity.

• HISTORY OF COSTUME AND SET DESIGN